Here is a little tidbit totally unrelated to art… I am sooo sooo sneezy. I have no idea why, it’s allergy related I think, but I am not typically an allergy sufferer. As a side effect of allergies I am so sleepy I feel like I am going to fall out of my chair even after the aid of two cups of coffee and a reasonable amount of sleep last night. I just keep imagining a boneless me slithering out of my office chair into a blorpy pile of goo and giraffe sweater to be found by terrified janitorial staff.

Anyway, rainbow mermaid. Believe it or not this is MOSTLY chartpak marker. Then I scanned the little lady and added some details. Originally her head was turned away from the camera so all you saw was hair. It looked fine and all but, a better illustration with of more fun with her face in profile. I love the simplified forms of her face and it reads nice as a smaller icon.

Mermaid Monday! It’s a thing. Sketchbook page. I was drawing this while Adam was doing the CrossFit Merge Pumpkin Spice Throwdown. Instead of you know, watching. Bad wife. Bad.

This is a study while we were at Palenque. Palenque is a late classic Maya site in the Yucatan peninsula in the Mexican state of Chiapas. It held it’s own in the sway of large Mayan city states between 226 BC to around 799 AD. One of the most notable Mayan rulers, Pakal of Palenque, can be seen depicted all over the remaining plaster and in a very well preserved tomb that held his body. He was responsible for the largest build out of the Palenque’s architecture. He’s very easy to recognize as he had a very distinctive face, notably his large misshapen nose. I am under the impression he may have not been the most attractive of leaders, he was however, very successful and reigned for a solid 68 years, the longest known ruler of the Mayan kingdom. The Mayans were prolific to say the least with Pakal being no exception. Pakal’s tomb was remarkably well preserved. So well preserved that a lot of the painted plaster held up. His sarcophagus lid as well as his jade funerary mask are well represented today in a lazy google image search. If I remember correctly a few family members were buried with him, including his pregnant wife. That must have sucked for her.

Most of the time grave robbers in Mexico dig out holes and loot the Mayan archeological artifacts and sell them on the black market. This happens today. Sadly there are SO MANY uncovered Mayan ruins there just isn’t enough money to keep the sites secure- or to even excavate them. You can pretty much walk down a jungle path, find a big hill overgrown with trees and not realize it’s a Mayan stepped pyramid.  BUT BACK TO BLACK MARKET MAYAN ARTIFACTS… people are jerks and even though this site is amazing, people take bits of plaster off of the buildings. The site isn’t secured and is one of the pyramids you can still climb, as a result people take the liberty steal things or yank off detailed bits of plaster for keepsakes. So what I saw in 2007 very well might not be the details I would see if I visited today. You can kind of see in the sketch of the foot at the top right- It used to be attached to a leg and most of the bas-relief has been lost to tourism. Nothing is being done to combat this. *Sad face*

Gotta love taking your sketchbook with you to amazing locations. One of the great perks about working for Imagineering is the travel. Sometimes you just need to see and experience something as an artist to really get a feel for what you are trying to recreate. Part of what we strive for when we build an attraction or a place is a sense of authenticity. A place or experience is filtered through our imagination- what we found exciting, how we want to tell a story and what we want our guests to feel when they are in a place we’ve created. It’s editing on a strange and massive scale. We take what is beautiful and unique about a location and culture and try and edit it down to its best features. Idealism is a very real part of design for themeparks. I could recreate hollywood Blvd. for you as it REALLY is, but I’d imagine the hobos, hookers and pee smells might cause the Hollywood in your mind to lose it’s charm. So sometimes a copy of a place isn’t what you want… but the essence of a place is. Most of the time the essence of a places is what makes it feel authentic, and not how “real” you make it. That’s research and that is design. I always like to remember something Imagineering legend Joe Rohde said to me: “Our goal as designers is to make it look like there was no designer.” Which basically means in a nut shell, the place should feel so real that you forget you’re in a themepark and that you shouldn’t see the hand of an artist crafting anything. It’s just real place. I think this is best displayed at Disney’s Animal Kingdom.

Just like taking notes helps you remember a subject in class, so does sketching on location. The details in architecture, landscape and materials in a place describe where it is… it all contributes to making something authentic. When you draw, details are programed into your mind differently then if you took a photo. A photo is so fast that there is no time to reflect upon shapes like you would in a drawing or painting. As you can see in this sketch I was focused on the details and influences of what makes Mexican architecture… well, Mexican. Most things have a history and it’s very easy to see the graphic geometries of the late Maya and Aztec cultures merging with spanish colonialism. It’s what gives this particular place (Campeche) it’s character. Light, color, shape and sound are all things an artist takes from a research trip and distills them down into an experience. It’s an incredibly valuable and indispensable process for great design. Unfortunately research is disregarded more and more by companies that do creative work, perhaps not understanding that the research and experiential phase if design is the most important. Creativity is an extremely exhausting, analytical, logical and laborious process. Creativity is a language born of knowledge, deduction, problem solving and skill. It really does deserve a LOT of respect as it doesn’t just fall out of someones brain without a lot of work.

Courtney Stodden. Those two words are synonymous in my mind with sheer mind-numbing voyeuristic entertainment. It’s not a big secret that the human psyche loves a little bazaar with their morning coffee and I am no exception to this rule. I don’t generally follow celebrity gossip columns as I generally don’t care that much about celebrities- but come to that I am not even sure if Courtney IS a celebrity. I have a few fave actors that I hold in great esteem like Daniel Day Lewis and Gary Oldman… but lets face it, they’re not up to entertaining antics. Courtney can’t sing, though she tries, she can’t act though she tries, her pumpkin carving skills are questionable at best- and in the shoes she wears… im pretty sure dancing could result in very serious injuries, if not death.

Courtney, if you remember- back in 2011 was the 16 year old bride of then 51 year old Doug Hutchison (Lost, Green Mile actor). She’s a busty, vivacious, perversely religious, animal loving, entirely STRANGE human being who I am utterly fascinated with.  Like, I want to be her friend and ask her questions and present philosophical conundrums and see how she responds. Her twitter kills me, her Instagram is nothing but ridiculousness and she once got kicked out of a pumpkin patch for being too risque. I should hate her, but I don’t! she owns being a cartoon character like no one I have ever seen with a naiveté that just makes you sigh and think “oooh that Courtney, she’s at it again.” Weirdly lovable.

Clearly she is a real person with real feelings and is probably a very nice person, but to me, she is like a really cool tropical bug exhibit at the natural history museum. I am perplexed, fascinated and wholly absorbed in all the things she does. I follow her on Instagram and Twitter and I can guarantee you I’d ask for her autograph and a picture if I saw her on the street. She seems like the kind of celebrity that both knows she’s ridiculous and is totally on board with it.

Anyway, her lady mammaries keep getting bigger, as do her lips. I drew her little character today after having yet another conversation about her to friends at a party. I didn’t really take the drawings far enough, eventually I’d like to draw a very silly one with just her eyeballs and a bit of platinum blond hair peeking above her giant knockers… but until that happens here you go. Magic in lucite heels.

Dawww… Inktober 15 with a combo of Sketch_Dailies. Baby Edward is cuute. Pen and ink yo.

I was in Europe for two weeks. Since it’s Inktober I thought I’d start my first post back on my site as lucky No. 13. Nothing fancy here! Just an brush pen drawing with some photoshop washes. Easy peasy.

Summer is ending guys! Nooooo. I have spent so much time at the beach this year. Living in sunny southern California has it’s perks and it’s actually pretty rare that I GO to the beach even though it’s so close. I usually just go, read a book and take a nap. Then get horribly burnt. Yay!

This is inspired by my friend and co-worker Staci. She’s a sassy ginger. I just imagine her reading a book on baking while baking in the sun, she’s prolific like that.

I used to be into punk. True story. In high school I had pink spiky hair and I thought I was THE coolest listening to Operation Ivy, sporting ripped jeans, chucks, and safety pins on my Jansport backpack. Which all things considered was kind of hilarious. Kids are dumb, myself included. Ah well, here is a punk inspired girl. I don’t even know if she’d be considered punk… maybe sexy modern nouveau punk. I’m going to call her that anyway and there is nothing you can do ’bout it.

Adam was watching really terrible TV last night, lets just say I had some time to doodle. These are some very pretty co-workers and fellow Imagineers. I added some fluff to them ;P I mean c’mon, I have a site called the chubby mermaid!

I cropped the bejesus out of this thing. I didn’t want to draw a background. LAZY! 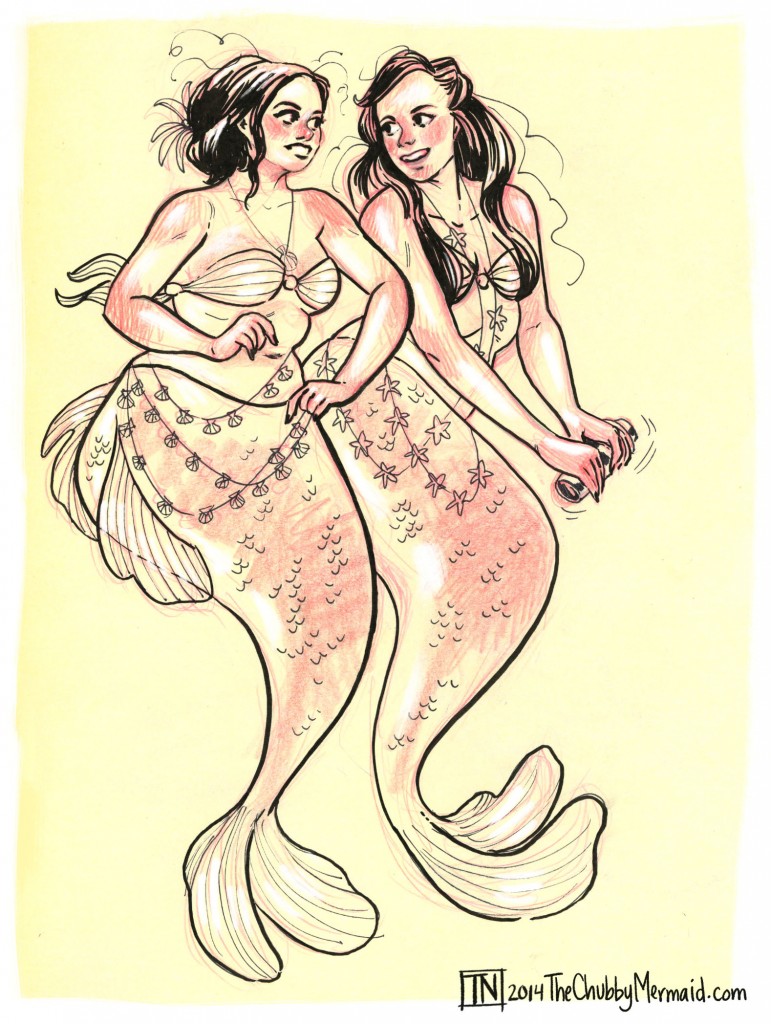 Made with By Tracey